A client was over a few days ago and we were talking about Andrew and hockey and such. He asked some other questions about Andrew, so I showed him Andrew’s trophies in his bedroom, amongst all of his other treasured belongings. Afterwards, client said “it must hurt” to go into his room.  It made me think.

Yes, it does hurt to go into his bedroom, to see all of his precious belongings – to see his childhood toys, his guitar that he learned to play on collecting dust, his skateboard that does not bring anyone anywhere anymore.  It hurts to see the paintball gun that he loved to use just sitting there, to see his rubiks cubes, some solved, others that will never be solved because he is not here anymore. His New York Rangers sticker peeling off the window because no one is there to fix it, right next to his Harrison Huskies sticker and his Rye Mariners sticker – all parts of his life.

To see the things I gave him that I knew he would like to play with or just to have, like his collection of foreign coins he’d been since he was five. There is also the light cube that one of my dearest clients gave me because he knew Andrew would appreciate it (see it here).  Andrew never got to see it because it arrived the day before we lost him – that really hurts because I know he would have stared at it for hours in amazement.

But I also find comfort in his room.

I look at his paintball gun and recall all the good times he had with it. I used to watch him take it apart and meticulously clean it.  He used to exchange parts with his friends and use different triggers, and different tanks – he loved to just experiment and try different combinations.  I look at the rubiks cubes and recall a story Todd tells. – Todd handed Andrew the cube in front of some of his friends, and in the time it took for Todd asked his friends how long do they think it would take Andrew to solve it, and their answers that he would not be able to – Andrew handed the solved cube back to Todd.  Everyone was amazed. 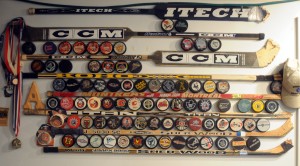 I look at his top shelf full of trophies. Not just hockey, but chess trophies and soccer trophies as well.  Lasting reminders of the triumphs Andrew and his teams earned over the years. I remember each and every one of them. I remember the games, I remember the teams, I remember the embraces afterward. I was fortunate enough to have coached Andrew’s teams for nine years, as well as spring leagues and tournament teams. It brings joy to my heart when I think how proud he was to be part of each and every team he was on. He was never the star of the team, but he loved being part of it. We have received so many messages from his teammates telling us how Andrew was such an integral part of their teams, and they usually mention how he made them all smile and laugh – no matter what. Looking at his wall of pucks that he collected over the years. There are so many that we never got to put up.

His electric guitar is also still in his room. I look at it and wonder how it sounded when he played it. He used to not want to bother us so he plugged it into his amp and used his headphones, so we never really heard him play. But his friends said that he played for them, and we hear he was pretty good. He also had an acoustic guitar from Uncle Joe, that his cousin has now.  He is learning to play as well in Andrew’s honor – that makes me happy.

I also see Andrew’s black and white flannel shirts hanging up, and I hang them on his door knob so I see them every day when I walk down the hall. I see his t-shirts and his team jackets. Although he outgrew many of the clothes he had, he kept them as a reminder to himself of the good times he had when he wore them. There are shirts from the farm, from old hockey teams, from school – all too small for him, but memories attached to them. Some of those memories still live on with me, but some of them only known to him and  passed along with him. Some of the shirts we will keep forever, but others will be made into memory quilts for those who knew and loved Andrew.

What else is there? He has the license plates from his cars – he loved loved loved to drive and I love the fact that I can see his license plates and remember the smile that he had whenever he drove his Jetta or his RX8. There is an armrest that he took from his high school auditorium.  I asked him about that and he said he just thought it was cool to have. He also had some keys to the school, along with a pad of library passes and a pad of late passes – I don’t know where he got them or what they were for, but he thought is was too cool to pass them up. That was my son.

So does going into Andrew’s room hurt? Of course it does, it hurts like hell and brings tears to my face every time.  But his room is full of who Andrew was, what he was, what he loved, what he wanted to be.

I would not give up my daily visits to my son’s room for anything.

3 thoughts on “It Must Hurt”